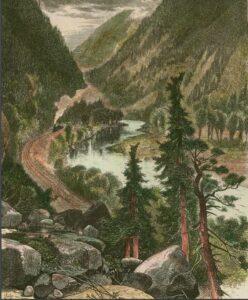 Thousands of travelers have witnessed the beauty of the “Long Narrows.” This is the historic name once assigned to the stretch of Route 322 located between Mifflintown and Lewistown.  In recent history the name was shortened to simply, “The Narrows.”  Perhaps, as I, you knew little about its colorful history.  Today we will look at this scenic section of highway through the eyes of the editor of a local newspaper, Henry J. Fosnot, as printed in his 1885 article.

Let me begin by saying it was no small task to decipher his account as many of his word choices are not still commonly used.  For instance, he began by referring to the inhabitants as those who rusticated there.  Yes, I had to look that one up and it simply means, living.  “Long Narrows” was also referred to as “seven-mile tavern.” Perhaps because at one point in its history there were five taverns situated within this seven-mile stretch.

His account states that visitors and residents of “Long Narrows” enjoyed beautiful views and amenities that rivaled more luxurious, expensive seaside resorts. He is quoted as saying, “The ocean may be grand, the beach inviting, the hotels as large as their bills, but a month amid nature’s scenes in the Narrows is worth more to health and pleasing reminiscences than six months in any summer resort.”

When depicting things its residents enjoyed, he boasts that they owned their own cows and were able to enjoy milk and cream unmixed with chalk and water.  So, I guess that was a thing in those days, used to stretch the milk.  Who knew?  He went on to relate that there was also an abundance of blackberries, huckleberries, and ice-cold mountain water.   He described the beautiful river and mountain views with the canal and railroad situated in between.  The individuals living there, he boasted, dressed the way they wanted, did what they wanted, and slept soundly each night.  Sounds darn good to me!

He recounts that if you look much further back into the history of “Long Narrows” you would see a vast variety of romantic episodes, roystering (celebrating), drinking, fighting and most likely crimes.  They were described as drinking and fighting days.  The whiskey flowed freely, and it only took a word to begin a fight.  Even though there were bloody noses and a few black eyes, in the end, faces were washed, hands were outstretched in search of forgiveness, and drinks were taken all around.

One person documented to have lived there in 1789 (the year Mifflin County was organized) was David Jordan, a blacksmith. Although he manufactured a variety of things, he was best known for his cow bells.  Turns out they were a very sought-after commodity at the time. I guess it makes sense, cows were expensive, and you didn’t want them wandering off!

When the canal was completed in “Long Narrows,” it included a river dam, three lift locks, two lockhouses, a public bridge and a long river wall.  Most of the work on the canal was done by Irish immigrants who along with other locals, frequented an establishment owned by a very enterprising women by the name of Mrs. Bumbaugh who lived near the dam.  Her shingle read, “Cakes and Beer,” and it is said that she enjoyed a thriving business as these canal construction workers enjoyed a beer while nibbling on her infamous ginger cakes.  Life was not always pleasant for these canal laborers, however, with many of them suffering with chills and fever due to the dreaded “Juniata Fever.”  This disease was compared to the yellow fever that ravaged the South.