We sometimes imagine that we must travel far and wide to unearth the unique and unusual, but sometimes they exist, undiscovered, in our own back yard.  Just this morning I was talking to a long-time area resident and friend at the coffee shop (because all good discussion happens over coffee) who mentioned just how much there is to see in this big world of ours.  He also acknowledged that there are probably places he hasn’t explored right here in our Juniata River Valley.  That triggered me to ask him if he had ever visited the Arched Rock for which the Arch Rock Exit off 322 near Mifflintown had been named.  He replied that he wasn’t aware of its existence.  As it turns out, he is not alone in his lack of knowledge of the Arched Rock formation located there. I only learned of its presence a few years ago as I stumbled upon it while traveling the beautiful back roads of Juniata County visiting our unique, covered bridges (a story for another day.)

The Chamber hosts a mystery tour every year highlighting some of our unique, out of the way spots, and a few years ago included a stop at the Arched Rock.  When asked how many of our 52 passengers knew of the Arched Rock’s existence, only 2 hands went up.  Think about how many times you have driven by that exit.  Did you ever wonder how the exit received its name?  Well, now you can wonder no more.

This type of formation is called an anticline.  An anticline describes a folding of the rock, rather than breaking, when it experiences pressure.  This gives it its unique arch-like shape.  As you look at the arch, the oldest layers of rock are at the center with the layers becoming progressively younger as they extend out, which gives the arch its distinctive, multi-hued layers. 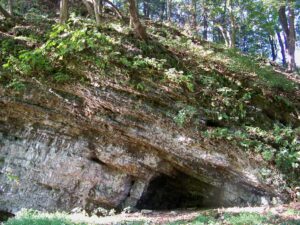 If you would like to visit this local natural wonder, take the Arch Rock exit off Route 322, head north on Arch Rock Road for a short distance. Just past the Arch Rock United Methodist Church, the formation is located just behind the church on your left.  If you would like a closer look, or wish to get some photos, pull off and park next to the church building.  As you traverse behind the building, you will be amazed at the sheer size of this geological feature as it juts upward before you.  The scene is made even more beautiful as it is situated alongside the picturesque Horning Run. 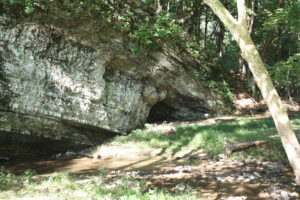 Now you have another nearby location to explore with family, friends, and visitors.  This reminds me of a well-known analogy given by Reverend Russel Conwell in the early 1900’s entitled “Acres of Diamonds.”  This metaphor told the story of a farmer who sold his farm to travel the world in search of diamonds so he could become rich.  Sadly, his searching was fruitless, and he returned having never discovered the elusive treasure. In the meantime, the man who purchased his farm noticed a sparkle in the stream running through the property and to his surprise found a diamond and then another, and another, soon becoming very wealthy.  The parallel we can draw from his story is summed up in this infamous quote, “Your diamonds are not in far distant mountains or in yonder seas. They are in your own backyard if you but dig for them.”